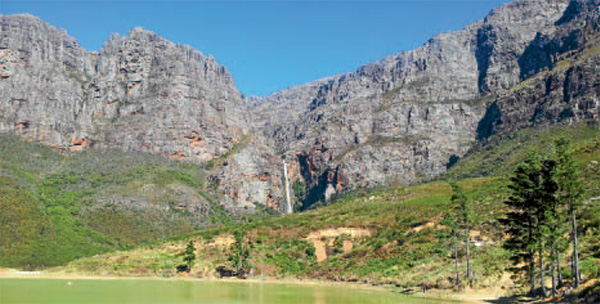 Business tycoon Johann Rupert is months away from switching on a hydro-electric plant powered by the 130 m-high waterfall in a gorge on his L’Ormarins wine estate outside Franschhoek. The private project will generate 2,3 MW of electricity — enough to supply the 1 100 ha farm’s entire energy needs and still produce a 2 MW surplus, which will be fed into the national grid. The surplus can power at least 200 households. Rupert, the chairman of Richemont and Remgro, has declined to divulge the cost of the project. It has i nvo lve d importing two turbines from Germany, using helicopters to carry cement , pipes and personnel up to the gorge in the Drakenstein mountains, and running a pipe down the mountainside next to the waterfall . Gary Baumgarten , MD of Anthonij Rupert Wyne, says that based on current electricity prices the project will pay for itself in 8½ years. The development will also m a ke the wine estate the first in SA, and probably the world, to run on its own hydro-electric power. “It’s an ingenious concept, given the price electricity will go to in SA,” Baumgarten says. “It’s Rupert’s brainchild. He looked at this waterfall and wondered if it could be done. He’s been wanting to do it for years, but it had to become viable.” According to Baumgarten, it’s taken about two years for the farm to conduct an environmental impact assessment and obtain a water licence allowing it to divert a portion of the waterfall to power the scheme. These were in place before the Ruperts approached national energy regulator Ne rs a in May for a generating licence. They expect it to be granted in July. Nersa has confirmed that it is considering the application.

The plant was designed by Cape-based engineer Ian de Jager of I&F Engineering. It taps water from a natural, rain-fed stream, rather than from a dam. A weir has been built a b ove the waterfall to siphon off a small portion of the stream i n to a pipe that runs down the mountainside to power the turbines at the bottom. The pipeline’s height creates strong pressure, which turns the turbines. After leaving the turbines the water is fed back into the river, leaving the river level and temperature unaffected. The waterfall peaks at about 10 000 l/second after heavy rain. The scheme is licensed to divert only a portion. It cannot touch the first 77l, which is the reserve flow that must be maintained to allow plants and fish in the stream to flourish. Environmental conditions are attached to the project. Alien vegetation must be cleared to within 500 m of the river and any fynbos affected on the mountain must be rehabilitated. Certain plants unique to the area and to Table Mountain have been cordoned off during construction. “What makes this project nice is that we can do a very technical project working with nature, not against it,” says De Jager. If Eskom were to generate 2,3 MW, it would come with carbon emissions of more than 6 000 t/year.

Following the oil trail
Petro SA, the state-owned oil company, is pursuing a downstream acquisition in S A’s oil sector and is talking to various partners, spokesman Thabo Mabaso s ay s . But he would not confirm whether Petro SA had made a bid for Malaysian-owned oil group Pe t ro n a s’s stake in E n ge n . Petronas owns 80% of Engen and Pembani Group owns the rest. Last year it was reported Petro SA had completed a due diligence into Engen by October and would make a bid, valued at between R11bn and R18bn, by end December. Engen spokesman Gav i n Sm i t h confirms that Petronas has received an unsolicited bid for its stake but no transaction has been concluded. He referred inquiries to Petronas, which did not re s p o n d . Mabaso says Petro SA is talking to various partners in the downstream industry but has no significant announcement to make yet. Petro SA considers it important to have a presence in the entire value chain, he says. E n ge n’s business includes refining crude oil, marketing primary refined products and operating a network of about 1 500 forecourt petrol stations across sub-Saharan Africa and the Indian Ocean islands. It also owns storage facilities and tankers. Charlotte Mathews

Please click on the link(s) below toread the full article.