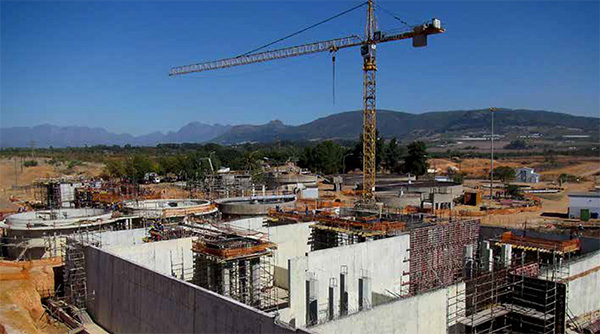 With an existing design capacity of 6 Mℓ/d, the Wellington WWTW has become overloaded from both a hydraulic and organic perspective, rendering the plant unable to treat the incoming wastewater suitably. This has affected the ability of the WWTW to comply with effluent discharge standards, presenting a major risk to downstream users and ecosystems in the Berg River – an important water resource in the region, explains Ronald Brown, senior engineer: Wastewater Services, Drakenstein Municipality. The incoming wastewater flow is also close to exceeding the design capacity of the existing plant, which will hinder future development in the catchment area – specifically social housing development in Wellington and surrounds. Drakenstein Municipality has a very strong focus on installing bulk services prior to the implementation of any housing projects and other developments, says Brown. In addition, a number of the assets at the current plant have exceeded their life expectancy, further necessitating the upgrade. However, the large capital cost the project meant it was delayed for a year (due to funding constraints) before it was elevated to a high priority and funding was procured from within the municipality and the Municipal Infrastructure Grant. The project involves an upgrade of the WWTW to a full biological nutrient removal process capable of handling up to 16 Ml/ day, catering for the seasonal changes in the influent load experienced during the agricultural harvesting season when the organic loading on the plant increases significantly. “The plant’s process operation design caters for this scenario by varying key process parameters during the harvesting season to ensure effluent quality compliance,” explains Neeren Govender, technical director: Wastewater Engineering, Aurecon.

Automation controls
The upgrade will allow for the full automation of the WWTW. The entire plant will be monitored, recorded and controlled via a centralised supervisory control and data acquisition (Scada) system. This was considered necessary due to the size and complexity of the upgraded plant, and to optimise the process control and operation efficiency, explains Govender. All of the activities critical for ensuring plant performance – including primary sludge wasting, waste activated sludge wasting, operation of the main sludge pump station and aeration – will be fully automated. Biological treatment upgrade Due to its overloaded state, the existing Wellington WWTW is not compliant with the prescribed effluent treatment requirement in terms of Section 39 of the National Water Act (No. 36 of 1998). For this reason, the biological treatment process will be upgraded to ensure complete nitrogen and phosphate removal, and ultimately compliance. Biological aeration is a vital function in any WWTW to ensure organic and nutrient removal in a conventional activated sludge system, and typically accounts for between 40% and 60% of the annual running cost of a WWTW, primarily due to the high cost of the electrical power required, explains Govender. The Wellington WWTW will incorporate a fine bubble diffused aeration system, which is more efficient than most other aeration systems, resulting in lower energy requirements. In addition, high-efficiency blowers were specified to supply air to this system, further reducing energy requirements. The effluent disinfection process will comprise a closed-vessel UV disinfection process. Initial calculations show that this system will have a lower life-cycle costing when compared to the gas chlorination system installed on the current plant. UV technology also has other advantages over chlorination, adds Govender, namely avoiding the safety concerns around handling and storing chlorine as well as being effective against chlorine-resistant pathogens like Cryptosporidium parvum and Giardia. Centralised sludge treatment A feasibility analysis was undertaken during the design stage to determine the cost of upgrading the existing sludge treatment facilities at the Wellington WWTW versus conveying the sludge to the Paarl WWTW and creating a centralised sludge treatment facility. The latter was found to offer a cost saving for the municipality because the Paarl WWTW already has more extensive sludge treatment facilities in place, and thus requires less capital investment, explains Brown. According to Govender, a centralised facility also offers economy-of-scale benefits, opens up opportunities to utilise gas from the anaerobic digestion processes to generate electricity, and is beneficial from an operation and maintenance perspective. The centralised facility will cater for the treatment of sludge generated at the Paarl WWTW, the upgraded Wellington WWTW and the future Paarl South WWTW. To achieve this, a sludge pump station and two 5 km long pipelines will be constructed to convey primary sludge and waste activated sludge from the Wellington WWTW to the new centralised sludge treatment facility. Construction of the pipelines is at 55% and Woodburn hopes to have the bulk of the work completed before the 2017 Cape winter. Although there are no major technical challenges, the coming rains will delay completion, and local community challenges have no doubt hampered progress on the project.

Keeping the plant running
One of the municipality’s requirements on the project was to keep the existing plant functional during the construction process. This presented a major challenge and required the engineering of temporary processes and an integrated project delivery approach from the municipality, design consultant and contractors during the construction phase. The Wellington WWTW project is particularly unique in that it is a very small site and access to the various structures has been challenging. Stefanutti Stocks had to establish two tower cranes to alleviate the very congested site. Woodburn states that it is these types of projects that make construction in South Africa interesting. According to Bertus Jacobs, project manager, Stefanutti Stocks, locating and protecting existing services and controlling safe excavations presented quite a challenge, particularly when working between structures. This has resulted in delays on critical work. For example, Stefanutti Stocks had intended to complete a temporary diversion early in the project but, because of the existing pipe work not having been constructed as planned, the diversion has still not been completed. There are also several structures in need of refurbishment, but the process will be delayed during the rainy season when the plant needs all of its functional structures to accommodate the higher flow.

Handover of project
The project entails a large capital investment in infrastructure together with the implementation of new technologies for the municipality. This necessitates additional care in the handover process to ensure that the WWTW is fully functional and compliant with its licence requirements. As a result, the contract includes a three-year operation assistance, maintenance assistance and training period to support and train the municipal staff working on the plant. This will mainly involve the mechanical and electrical contractor, but will also include Aurecon and Neil Lyners and Associates to ensure that the handover and training process meets the municipality’s requirements. Construction on the project is expected to be completed in August 2018, having commenced in March 2016. Once completed, the upgraded Wellington WWTW will cater for surrounding regions’ treatment capacity for the next 20 years.

Please click on the link(s) below to read the full article.